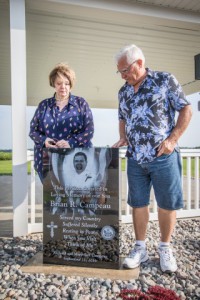 Maryellen Campeau of Watrousville remembers how her son always used to say, “Good job, mom!” and truly believes he would say it for her latest venture.

It has amenities of a modern pavilion: electricity, access for people with disabilities, a concrete floor, the overall stability and protection afforded by a modern facility and all while being set on the edge of a picturesque farm field where the breeze always seems to flow just right.

But Brian’s Place also features something that can’t be found anywhere else: a black granite monument commemorating Brian Campeau – a 1988 graduate of Caro High School and U.S. Army veteran who served for three years in the first Gulf War and died in a Veterans Affairs hospital in 2010 after struggling for years with health issues associated with what has come to be known as “Gulf War syndrome.” (Read more)

(This story originally appeared in the Sept. 7, 2016 print edition of The Tuscola County Advertiser and can be read in its entirety here.)

Poet Biorefining looks to build on first 15 years in Caro

Caro native, star of ‘Annie’: Save Thumb Area Center for the Arts building