CARO — People like Kevin Hollosy and Ron Woloshen remember amazing summer days when Caro Lake was an active waterway – kayaks and canoes, families on pontoons, fishermen, even an occasional boat with water-skier in tow.

That’s when the Caro Dam was functioning properly – controlling water flow as designed, maintaining what had become known as Caro Lake along with water levels in the Cass River toward Cass City.

Those days are gone.

“We’d never be able to get this far in a regular boat,” Hollosy said last week driving a flat-bottom boat equipped with a special “mud motor.” “Before that curve, it was about a foot deep.”

“That curve” is just one part of the Cass River near the Michigan Sugar plant in Indianfields Township.

The low water is typical of the kind of problems facing the main waterway for the area in 2016.

“I think the water level is down, today, I would say six feet, ballpark,” said Woloshen, who not only grew up with the Caro Lake, but also is on the Indianfields Township Board of Trustees. (Read more)

(This story appeared in the print edition of The Tuscola County Advertiser on July 20, 2016 and can be read online here) 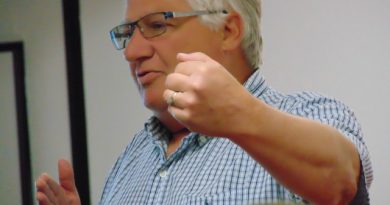