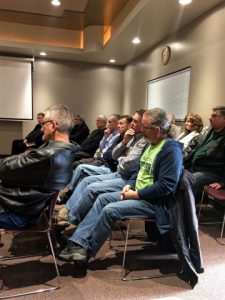 Tuscola County commissioners are discounting over a year of contentious meetings, legal wrangling, and turnover of two township boards as a matter of personality differences, calling it a situation similar to the “Hatfields and McCoys” that’s hurting the county financially.

The comments came at the Tuscola County Board of Commissioners’ committee of the whole meeting during a presentation by Tuscola County Controller Mike Hoagland, who outlined the need to reduce the county’s dependence on wind turbine tax revenue — especially in light of questions over the future of wind turbine projects in the county.

Board members identified a “greater than 50 percent chance” the scenario with one new project will happen. Workers have spent the last several weeks setting up the staging ground for the project — Consumers Energy’s Cross Winds II — along M-24 in Columbia Township.

The likelihood of a scenario where the county sees two new projects remains unclear, however, especially after Almer Township’s board of trustees denied applicant NextEra Energy Resources L.L.C.’s application for special land use permit last week for a project called Tuscola III Wind Energy Center. The company still can appeal, meaning the $200 million project isn’t completely off the table.

In Hoagland’s scenario with two projects (104 new turbines), the county could realize peak tax revenue for its general fund of about $1.5 million in 2021. By comparison, tax revenue to the general fund would be about $706,000 that year with no new turbines, having peaked in 2015 with about $1.1 million.

Two county commissioners put any potential lost revenue directly on those who have effectively slowed and/or stopped wind turbine projects in Tuscola County.

“I think a lot of these townships’ problem is, people just don’t get along,” said Kim Vaughan, commissioner, Tuscola County. “I got a township…no matter what that township supervisor says, they don’t like it. No matter what. He’d say ‘We aren’t taxing anybody this year,’ and they’d find something wrong with it.” (Read more)

(This story originally appeared in the Jan. 25, 2017 print edition of The Tuscola County Advertiser and can be read online in its entirety here.)