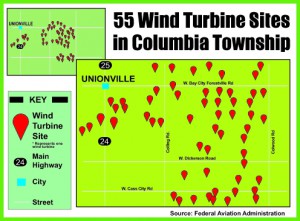 The 55 applications were filed July 13. Consumers’ original Cross Winds Energy Park in Akron and Columbia townships went into operation in 2014 and consists of 62 turbines and cost about $250 million.

Officials at Jackson-based Consumers Energy said it was too early to call anything definite, but noted several factors have put the company in position of ramping up activity related to development of Cross Winds II, originally slated for the 2021-22 time frame. (Read fully story)

(This story originally appeared in the Aug. 10, 2016 print edition of The Tuscola County Advertiser and can be read online here.)