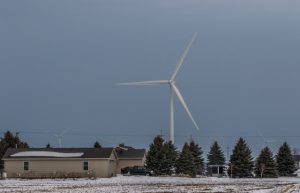 The tax dispute between NextEra Energy Resources L.L.C. and local municipalities could continue for years, end up in the Michigan Supreme Court, and tie up what one Tuscola County official called “millions and millions” in desperately needed tax revenue.
That’s according to Mike Hoagland, controller, Tuscola County, who provided an update on the tax dispute during the Tuscola County Board of Commissioner’s committee of the whole held Monday.
Hoagland provided the update in light of a Dec. 2 meeting of the board of the Michigan Renewable Energy Collaborative (MREC), an organization of counties that banded together to fight legal battles associated with wind-related projects.
The MREC board was updated by its attorneys from Detroit law firm Clark Hill P.L.C.
“The (Michigan) Tax Tribunal is expected to hear this case in March or April of 2017,” Hoagland wrote in a memo to the Tuscola County Board of Commissioners. “Both parties will most likely appeal the Tax Tribunal ruling and it could take up to two years for the Court of Appeals to hear the case.
“There is even the possibility the case could be appealed to the Michigan Supreme Court,” Hoagland continued.
For three years in a row, subsidiaries of NextEra Energy Resources L.L.C. have filed petitions against Tuscola County and several townships, contesting taxes paid for its operating projects, Tuscola Bay Wind and Tuscola Wind II — located in Gilford, Akron, and Fairgrove townships.
Juno Beach, Florida-based NextEra Energy Resources is a subsidiary of NextEra Energy Inc., and has been working for the past two years on a third Tuscola County project called Tuscola III Wind Energy Center. The $200 million project would be located in Almer, Ellington, and Fairgrove townships.
In the petitions, attorneys for NextEra Energy Resources have argued two main issues: that the value of wind turbines should be lowered because they were partially funded with federal grants, and that the assessed values in general were too high.
As a result, the petitions claim the NextEra Energy Resources subsidiaries paid too much in taxes and are due refunds. (Read more)

(This story first appeared in the Dec. 14, 2016 print edition of The Tuscola County Advertiser and can be read online in its entirety here.)

‘Heroin apocalypse’: Vassar man gets 30 years for dealing in Reese