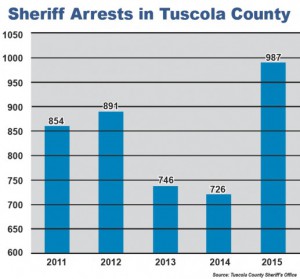 The number of arrests by the Tuscola County Sheriff’s Office increased 35 percent in one year –jumping from 725 in 2014 to 981 in 2015, according to a new report.
The numbers were presented by Mike Hoagland, controller, Tuscola County, during Thursday’s regular Tuscola County Board of Commissioners meeting. Hoagland presented the board with numbers as part of a discussion on “Tuscola County Dashboard: Social and Economic Indicators.”
Tuscola County Undersheriff Glen Skrent told The Advertiser the increase can be attributed to a number of factors.
“We had a traffic grant last year, which put more officers out on overtime,” Skrent said. “Our complaint numbers were up from the year before, which could also account for more numbers.” (Read full story)

(The story first appeared in the June 18, 2016 print edition of The Tuscola County Advertiser and can be read online here.)